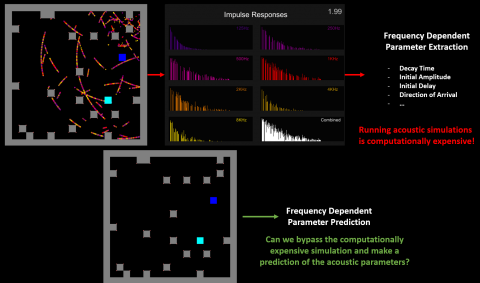 The computational complexity of simulating acoustics makes auralization difficult to achieve in highly dynamic, real-time video game virtual environments. Current methods are either too computationally intensive to run in real-time or require offline baking of acoustic characteristics making it difficult to be used in dynamic environments. Current advancements in machine learning and artificial intelligence may make acoustic prediction a viable path to auralizing virtual environments. This research focuses on training a model using supervised learning to make predictions on audio parameters to mimic perceptually plausible sound wave reflections and diffractions in a virtual environment, simply with a scan of the surrounding environment and without any live acoustic simulations. As video games are creative ventures, methods of manipulating a black box audio model for creative control are also explored. The effect on player experience of auralizing virtual spaces is also investigated with focus on the allowable error of a predictive model to maintain player immersion and perceptually plausible audio.

Auralization is the process of rendering the acoustics of a space through simulation.

What are the current methods for auralization?

There are two main categories of methods.