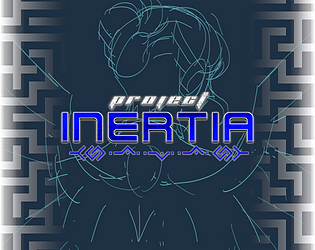 A Rush of Blood to the Head

Project Inertia is a stage-clear 3D action platformer with a focus on speed, style, and flow. The main objective sees players clearing stages in the fastest time possible whilst doing so in the most stylish way possible.
You play as Jessy, a new recruit amongst the largest delivery company in the world, Sword-Surf Inc. As a new recruit, your skills are put to the test as you are immediately given the task of delivering a package to Mineral-Mike, an avid rock collector on the other side of the wastelands.

On their adventure, Jessy is equipped with a Surf-Sword - a unique device that acts as both a defensive weapon and a mode of transportation.
Jessy can swap between two different control schemes during gameplay – one that derives from platformers and one that controls similar to skating games.
Walking Mode offers more vertical movement at the cost of speed, whereas Surfing mode gives the player speedier, looser controls with the ability to perform tricks.

Project Inertia features two fully featured levels of which only Jessy has the ability to traverse. Streak across the digitized skies of Cyberspace to collect Mike's package, then dash across the twisted wastelands of Risky Rails to finally deliver Mike's package.
There are a few interesting shortcuts that Jessy can take through the use of grind-rails and following the Kinetic Instinct inherit within them.

A Game by: Imperfect Chaos